The story at a glance:

LEARN MORE ABOUT THE COMPANY HERE

The price of uranium has solid long-term fundamentals.

The economics tell a classic supply and demand story.

The US Energy and Information Administration projects that worldwide electricity consumption will increase 50% by 2050.1

However, current energy infrastructure in the U.S. and abroad is ill-equipped to supply a large jump in demand without adding additional infrastructure.

With governments mandating clean energy to meet aggressive carbon reduction targets outlined in the Paris accord - the growth from renewable sources is expected to far outstrip energy growth in fossil fuel sources.

Oil prices have dropped over the past year, with high-profile projects folding and many firms continuing to divest from fossil fuels.

Today, the outlook for green energy providers looks strong, as President Biden signals support for carbon-free energy right out of the gate.

While the price of wind and solar energy producers have shown a notable rise over the past year, some investors, searching for less extended opportunities, are considering uranium, which will certainly be a significant component of the rising clean energy economy.

Uranium is both a domestic and global story with its underpinnings in clean, reliable, base-load power that nuclear energy provides and that policy makers are seeking.

From a global view, there are 53 nuclear reactors currently under construction, with 442 in an operational status.2,3

And many more reactors are planned. China intends to more than triple its nuclear capacity by 2030.4 India has announced that it will bring 21 reactors online by 2031.5 And Rosatom, the state-owned Russian nuclear company, has secured over 30 reactor supply deals with countries from Finland to Turkey.6 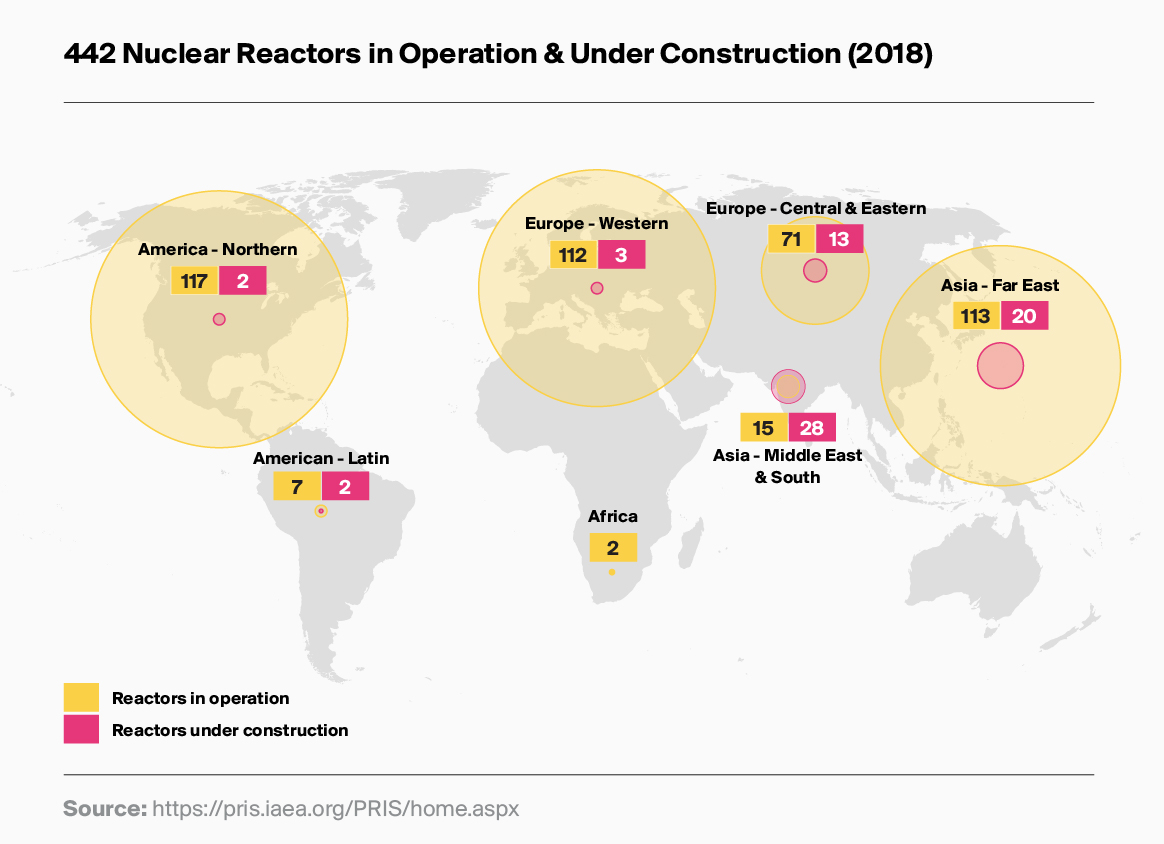 Gulf state economies are also joining the trend, with the United Arab Emirates starting up the first of four nuclear units under construction last year.

At uranium's current price ($29.00/lb at the time of writing), only about 60 million pounds of production is below the current spot price—in comparison to the roughly 175 million pounds estimated as required annually to keep reactors running.

Supply disruptions amounted to about 19  million pounds  in 2020 as a result of COVID-19  and has helped accelerate a rebalancing of the market. More recently, Cameco has again  temporarily suspended operations at its Cigar Lake Mine, one of the largest and lowest-cost mines in the world that normally produces about 18 million pounds of uranium per year.7

The price appears to be responding to these pressures. At the end of March, the price of uranium cracked US$30.00/lb for the first time in 2021.

Uranium is unique among metals in that investors generally can't buy and store physical U3O8 and sit on it, waiting for the impending turnaround.

In the past, the traditional way to give your portfolio exposure to physical uranium was by buying shares of Uranium Participation Corp. (TSX: U), a holding company "solely focused on investing in physical uranium."

It's a reasonable way to get into uranium. We can see in 2020 how closely the stock follows the uranium story, up and down throughout 2020 alongside the fluctuating price of U3O8.

There are other avenues in, of course. You could consider investing in an industry leader like Cameco Corp. (TSX: CCO), or one of a small handful of up-and-coming junior miners.

But now, there is a third option.

Royalty companies have long been a staple in the mining and resource sectors.

Royalty firms make their money by contributing capital to mining companies in return for a regular payment.

Bringing a mine from exploration to development to production is an enormous, time-consuming, and expensive process.

So, to help finance this development, royalty companies contribute capital in exchange for a percentage of revenue or profit generated from the eventual mine's production.

This process can offer lower risk than a traditional mining company, minimizing risk regarding the commodity itself while providing leverage.

Because of this, royalty companies tend to generate much stronger returns than mining companies, as we've observed time and time again in the gold market.

For example, compare the charts of some of the top gold royalty firms with the VanEck Vectors Gold Miners ETF (NYSEARCA: GDX).

The problem is, during uranium's last bull market in the 00s, there was no way for investors to gain the benefits of royalties for U3O8.

However, that has changed since Uranium Royalty Corp. entered the scene in 2017 and eliminated this issue—positioning itself well for the expected appreciation in uranium prices.

Uranium Royalty Corp. is the "first and only company to focus solely on acquiring uranium royalties, streams and other uranium interests," as its says on its site. 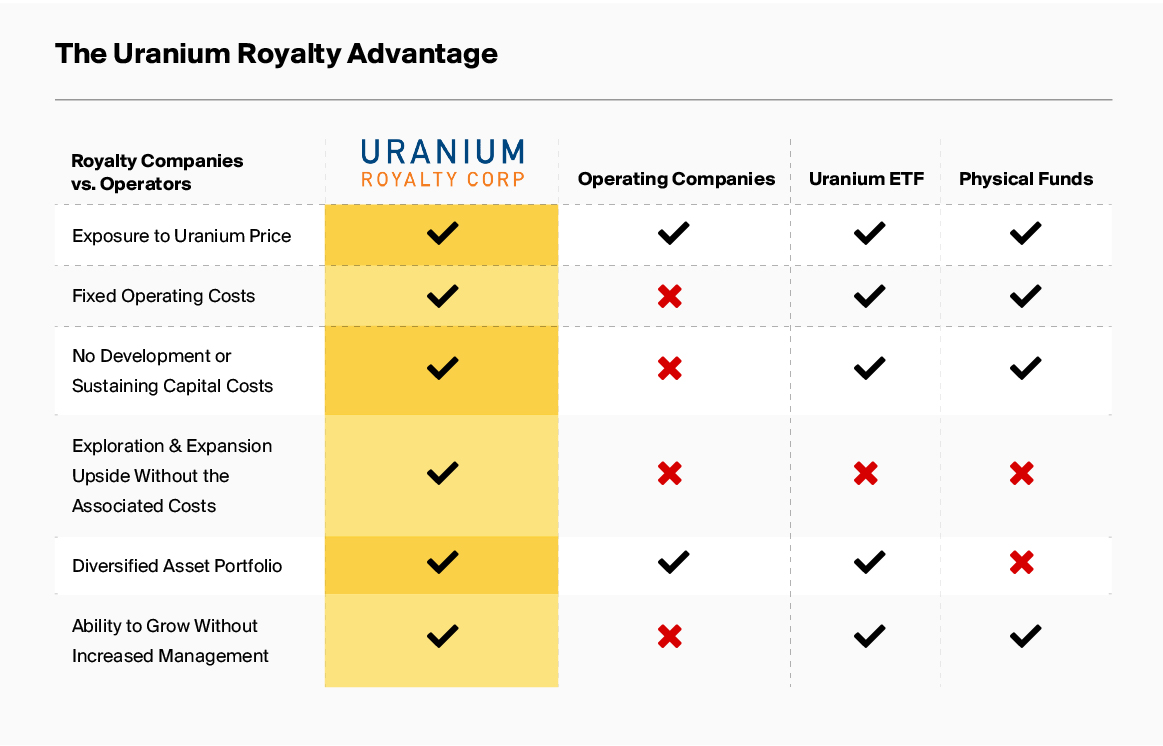 First comes its portfolio. To start, a banner item in URC's assets is its 9.6% stake in Yellow Cake PLC (LON: YCA), which provides it with exposure to physical uranium, acquired in a weak uranium market.

The interest in YCA effectively allows for "pure-play" physical U3O8 exposure to investors at an advantage.

The rest of URC's portfolio is diversified: 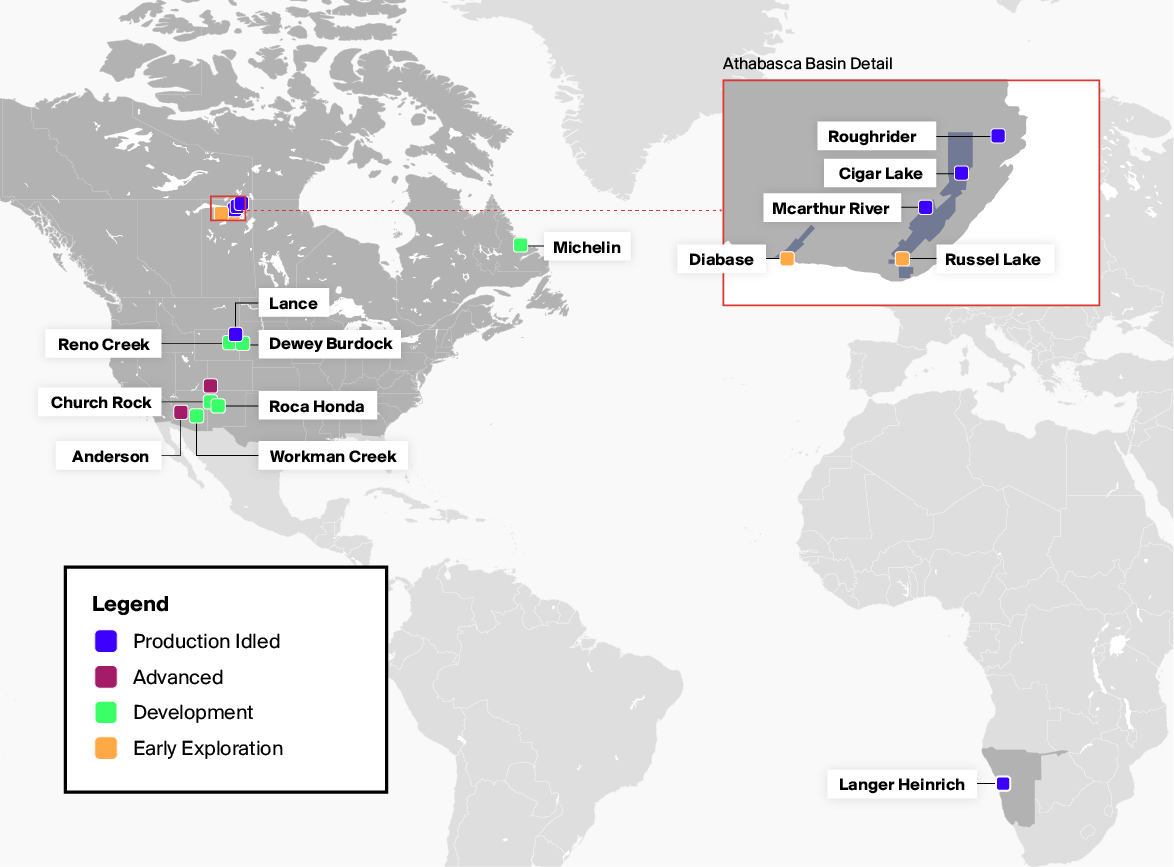 Through this portfolio, investors in URC get exposure to uranium projects at every stage of development, in multiple jurisdictions, without being exposed to volatile development and sustaining capital costs.

For a closer look at URC's assets, visit its Portfolio page.

But of course, this portfolio wouldn't matter much if URC lacked the management know-how to back it up. Luckily, the company is led by some of the most promising figures in the uranium sector.

A proven management team, backed by some of the most influential investors in the sector.

Talent and expertise are especially important in the uranium sector, where downturns can last a decade and complexity abounds.

URC's management brings a wealth of experience to the table, with extensive knowledge covering every facet of the industry: mine finance and development, project evaluation, uranium sales, and dealing with uranium firms both big and small.

Open up the company's Management and Directors page and you'll see some of the most accomplished figures in the uranium industry.

To start, the company is led by CEO and Director Scott Melbye, who comes to the organization with over 36 years in the field.

His long career stretches across multiple executive positions at some of the biggest players, including Cameco, Uranium One, and Uranium Participation Corp. He is also currently the President of the Uranium Producers of America trade association.

Not only that, but Melbye is a former strategic advisor to Kazatomprom, Kazakhstan's state uranium company, and the largest producer and seller of U3O8, responsible for around 40% of the world's total supply.

Next in line is Amir Adnani, URC's Chairman and Director. Amir is the serially-successful entrepreneur behind both URC and UEC, in addition to GoldMining Inc. and its Gold Royalty Corp. offshoot.

Amir is well-regarded throughout the resource sector, known as a figure worth following across his multiple up-and-coming ventures.

Alongside a stacked board, it's a team that has drawn some of the most high-profile investors in the resource space, including strong support from Rick Rule, Marin Katusa, and Eric Sprott's Sprott Capital.

The stock broke the C$2.00 mark at the beginning of February, as part of a steep rise that began in December, following positive analyst coverage reported in Canada's Globe and Mail.

The announced signing of a definitive agreement to acquire royalties on the world-class McArthur and Cigar assets and solid financials further sent the shares over C$3.50 at the time of writing. 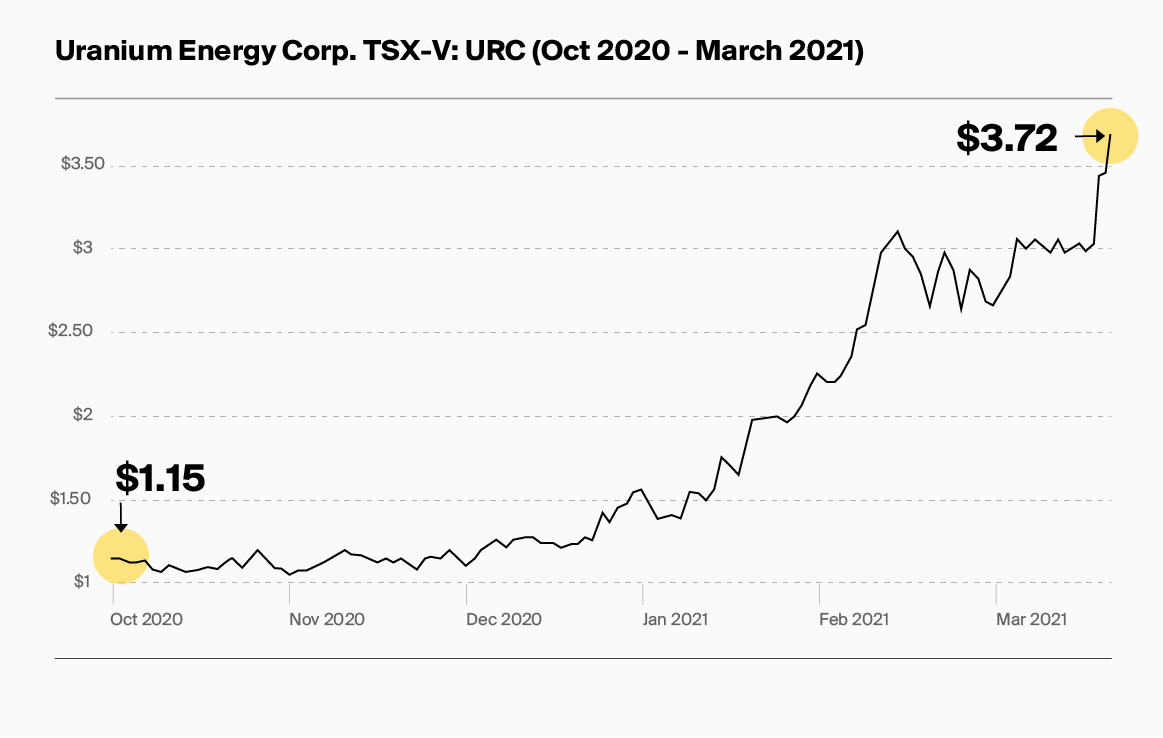 The market cap is currently around C$203 million for the only uranium royalty company in the market.

The company's physical uranium interests alone are already worth US$26 million at today's spot price. And as uranium recovers from a long bear market, URC can leverage its CA$38 million in cash on hand to secure new royalty streams—as it is doing with the recent Canadian acquisitions.

LEARN MORE ABOUT THE COMPANY HERE

A story with both near- and long-term catalysts

URC's continued success comes down to two factors: the oncoming uranium bull market, and expanding their base strategy.

So far, URC has focused on acquiring existing royalties. In 2021, it is turning special attention toward creating new royalties, streams for physical uranium, and M&A opportunities with additional partners.

Between COVID-19 impacts and the prolonged low uranium price, 2020 was a difficult year for uranium producers, meaning there weren't many miners or developers advancing projects into production.

As a result, URC was cautious in deploying capital given the volatile state of global financial markets.

Now, with vaccinations spreading, and improving uranium supply and demand fundamentals likely to incentivize new mine development soon, Uranium Royalty Corp. will be looking to capitalize on the opportunity.

A great deal of capital expenditures in new mine development will be needed to meet the growing global demand for uranium in the coming years, and URC couldn’t be better positioned.

The supply and demand story for uranium is underpinned with strong fundamentals and a global mega-trend towards clean, carbon-free energy. URC has royalties in place, with more to come. The team is well-established and equipped with the know-how to make it happen.

All these factors and more make URC a must-have for any investor even remotely interested in the mining, energy, or resource sectors.

One look at URC's stock chart will show that the investors see the opportunity and are positioning for rewards in the only “pure play” royalty company in the uranium industry.

The time to get involved is now.

PrivatePlacements.com and its and its owner and its owner's directors, employees, consultants, contractors, agents, and the like ("Representatives"), do not give any tax or investment advice; and do not advocate the purchase or sale of any security or investment. Contents are intended as general information. None of the contents constitutes an: (1) offer to sell or the solicitation of an offer to buy by Blender Media and/or its representatives any security or other investment; (2) offer by PrivatePlacements.com or its owner and/or their representatives to provide investment services of any kind; and/or (3) invitation, inducement, or encouragement by Blender Media and/or its representatives to any person to make any kind of investment decision. You should not rely on the content for investment or trading purposes. Securities or other investments referred to in any of the contents may not be suitable for you, and you should not make any kind of investment decision in relation to them without first obtaining independent investment advice from a person authorized to give it. All communications by PrivatePlacements.com are subject to its terms of use and disclaimer, which can be viewed here and here.